Holidays without Father Campaign is a Christmas gift collection for Ukrainian children from affected families in the war in Ukraine.

The campaign was started 5 years ago (2013) and it was planned as one-time form of aid for affected families of Ukrainian volunteers who were killed during the Maidan protests and the war in Ukraine.

Back then, no one could have ever thought that this was only the beginning of a long-lasting war and that the number of orphaned children would increase by thousands. Unfortunately, the war is still going on, and both the number of victims and the number of children who lose their fathers are growing.

We would like to emphasise that this is not an act of humanitarian aid! These are symbolic Christmas gifts and the main purpose is to show those children that we, Ukrainians who live outside of Ukraine, remember their parents’ heroic deeds. Moreover, we honour and respect them for giving the most valuable, their lives, in the struggle for our better future. 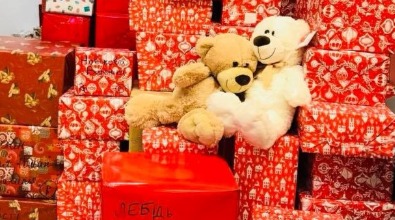 Each gift is individually packed by volunteers or ‘Elves’ as we call them. The kind of gift depends on the children’s age, gender and financial situation of the family.

Thanks to military workers and volunteers, veterans’ families, police officers, priests, individual gifts are delivered to the most remote parts of Ukraine.

189%
Most funds thanks to sharing: