A year after sentencing women.

On 22nd October 2021 will be the first anniversary of sentencing women – thanks to your generosity it will be possible to create a documentary film, which would become a social vote against the sentence adopted a year ago. In the film you will see real stories about women and their families. You will see, how painful was this year for them, since from 22nd October 2020 on they had no choice.

When there is not enough strength to protest, and throats are squeezed with helplessness, it is possible to do something different.

Let us make a film available in the web.

It will cry on our behalf.

The most important feature of a documentary film shows the reality as it is, and is not created for the needs of the camera. The people or events are filmed straight away, or are talked about by eyewitnesses, using authentic recordings (source of the definition: Encyklopedia PWN). With the help of the most powerful tool of our times, i.e. the motion picture, respecting the privacy of main characters, and at the same time showing inhuman suffering and heroism, to which they were forced, we would like to show the outcomes of that ban. 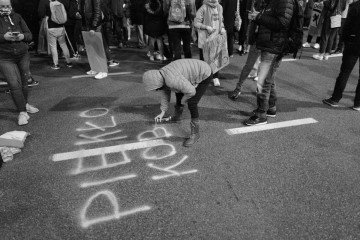 The statement of the Tribunal of J. Przyłębska questioned the article 4 section No. 1 item 2 of the law on family planning, i.e. the premises of terminating the pregnancy.

„in case, when pre-natal examinations or other medical premises indicate a high probability of heavy and irreversible impairment of the foetus or incurable illness threatening its life” and thus introduced a legal chaos.

Cases known to us are a torture and result in loss of health and the well-being of a family. It is the matter of time only, when the first Polish woman would die in consequence of this cruel and inhuman law. Words are the only witnesses – they show how the helplessness of women exposed to a dead-end situation without a way out leads to dramatic reactions, and, even if they are read with low voice, shout:

listen to Eva, which was deprived of her rights by politicians

"...I received the results of examination of my pregnancy. I took scissors and cut my hair. Children were watching ..."

In 2019 1 110 terminations of pregnancy were carried out in Polish hospitals, including 1074 carried out because of embryopathological reasons: data received by the Federacja na rzecz Kobiet i Planowania Rodziny (FEDERA)(Federation for Women and Family Planning). It means that as many as 98% of terminations of pregnancy were carried out in connection with determined heavy and irreversible defects of the foetus, with: Edwards syndrome, Patau, anencephalia, that is brainlessness, foeta with Duchenne muscular dystrophy, mucopolisaccharidosis, with heavily complicated heart defects (HLHS) or defects of the central nervous system.

Why do we make this film ?

In order to show, how dramatic is the impact of the political decision on women and their families, the decision which deprives them of the right of choice. Which has destroyed not only one family hearth. It may affect independent of her/his denomination, weltanschauung or social status, supporters and opponents of the ban, You and me.

It is possible that you also know a woman, who has experienced the trauma of pregnancy with an embryopathological defect. 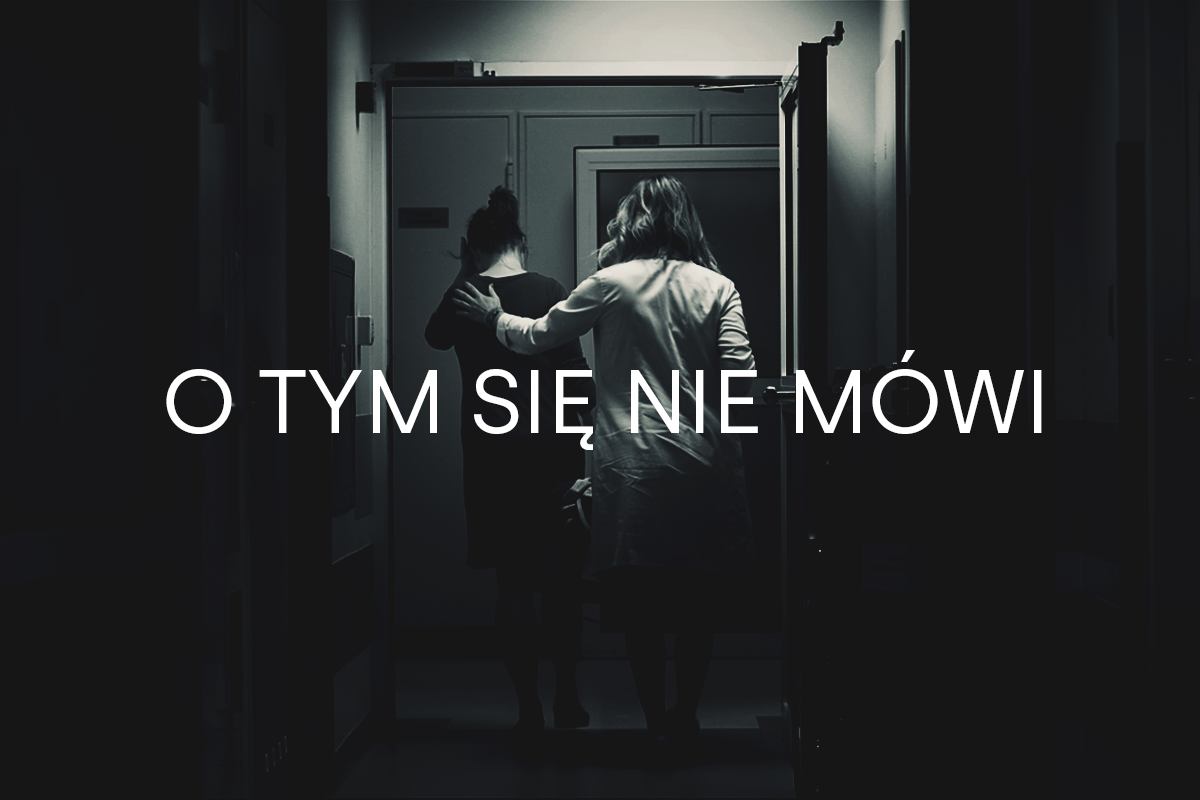 Monika Sawicka-Kacprzak, co-author of the project and mother of a child with a lethal defect says: "My intention is to make others understand, how great is the torture to press the mother to carry a child, which is going to die ".

The film is addressed to some 12 million Polish people, who are indifferent, do not have the opinion or support the ban on termination of pregnancy on the basis of hard and irreversible impairment of the foetus. The document will show sound, scientific knowledge about embryopathological impairments.

Listen to the opinion of a specialist: Dr Maciej Socha and learn the size of the problem.

As a group of social activists we believe, that together we are able to show the real effects of a political decision bearing unimaginable suffering and loneliness of women to society. We want to get through with expert knowledge to people – supporters of the ban, show them, how relevant is medical knowledge and how advanced is the level of pre-natal examinations. Examinations, which carry out life for women and their unborn babies. We have to continuously defend the basic human rights guaranteed in the Constitution of the Republic of Poland. However, if the majority is silent – someone has to remind, that You also have influence on the reality if only via raising a complaint to the Ombudsman. We believe, that together we will be able to stand up in defence of women’s rights – the rights of wives, partners, daughters, sisters, friends.

The European Tribunal of Human Rights (ETPC) received the complaints of Polish women  (July 2021), which wait for recognition. We know as well the Stance of the Polish Pediatric Society (2020) and the stance of the Polish Society of Gynaecologists and Obstetricians  (2020) Let us know your stance and help us to accomplish the project:

The film will be made accessible in the internet, so that everybody could have free access to it at no charge.

The “Damy Radę Foundation” – initiator of the project – operates in rural areas, where it is not commented upon, and distances to reach anything are great. Particularly difficult is the situation of women living in rural areas and in little towns, where maternity care is available with more difficulty. It has been confirmed with the report of the Supreme Control Chamber of Poland "Wiejska droga do ginekologa (Rural Road to a Gynaecologist)" of 2018 and the report of the Ombudsman Limited access to gynaecology in rural areas. The Ombudsman writes to the Ministry of Health and the National Health Fund of 2019. After the sentence of the Tribunal of 22.10.2020 the situation in rural communes became literally dramatic.

Co-creators of the project are, among others:

· Monika Sawicka-Kacprzak, and her book „NieBoPiekło” describes her story and the story of pregnancy of other 15 women carrying babies with lethal defects.

· Dr Anna Parzyńska specialist of  obstetrics and gynaecology, works in the Subdepartment of Foetal Medicine and in the Consultancy of Pre-natal Examinations in the Bielański Hospital in Warsaw

· Dr Aleksandra Krasowska specialist in psychiatry and sexologist, works in the Chair and Clinic of Psychiatry of the Warsaw University of Medicine.

The project will be entirely financed from resources collected at this collection at zrzutka.pl run by the Damy Rade Foundation.

Within the framework of this undertaking a 45 minutes long film as well as three 30 seconds long films will be produced. The main characters of the film will be the women, who experienced pregnancies with embryopathological defects as well as doctors and psychiatrists, who see and experience the drama of such women on a daily basis. Since such is the reality of every day of their professional activity.

The assumed budget according to the sequence of expenditures from the donation:

stage 1: PLN 100 000/ gross production of a professional 45 minutes long film and 3 advertising spots according to the budget;

etap 2: PLN 149 953 / gross promotion in the internet (among others YouTube, social media), in the press, on the radio and TV; work of the team during the campaign (graphic design, printing of posters and leaflets, work of the team: management of social media messages, bookkeeping, legal services)

After the completion of the collection a public settlement of accounts will be carried out. 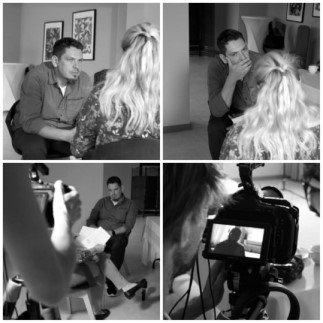 The recordings of the footage of the film have already been initiated, all the conducted interviews are very difficult, since they reveal tremendous suffering of women, their families and doctors.

We are a group of people, who got acquainted with one another in the internet, we are specialists in our domains, united by the common goal – telling the story about the silent drama of women, which takes place inside the walls of homes, since it is not commented upon.

The team working on the project:

• Monika Kacprzak-Sawicka writer, author of the book "Nie Bo Piekło" describing the story of pregnancies with lethal defects, her own story and the story of 15 other women

• Dr Aleksandra Krasowska specialist in psychiatry and sexologist, works in the Chair and Clinic of Psychiatry of the Warsaw University of Medicine

• Marek Osiecimski director of the film, documentalist, journalist of the Refugium Productions

• Dr Anna Parzyńska specialist of obstetrics and gynaecology, works in the Subdepartment of Foetal Medicine  and in the Consultancy of Pre-natal Examinations in the Bielański Hospital in Warsaw

July 2021: Meeting of several members of our team with the Ombudsman – professor Adam Bodnar, who, in view of the termination of his term of office declared personal support to the project.

We want choice made in line with our own free will.